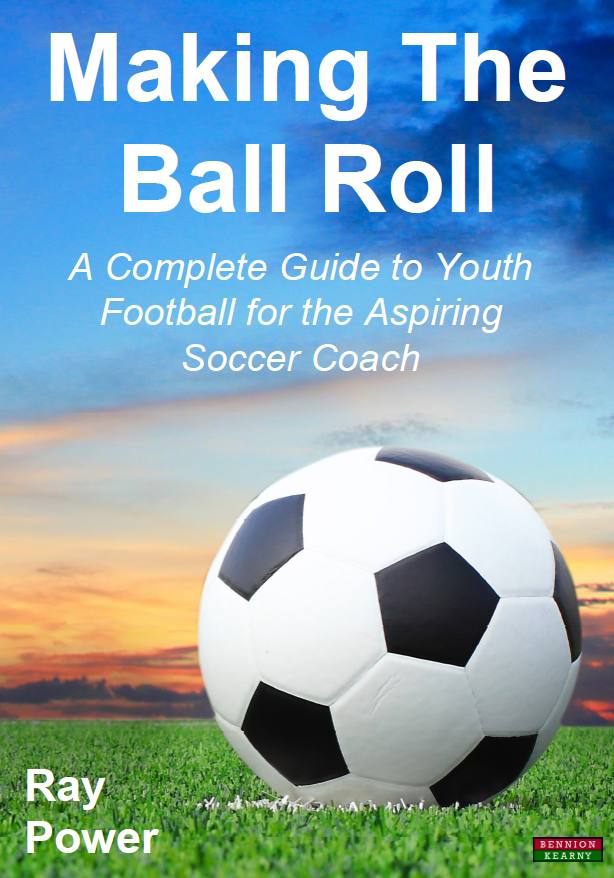 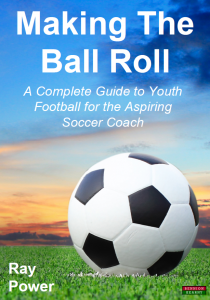 I must stress that the template below only is from Newcastle United. I contributed the session contained within. This template was shared on Twitter and I thought it was a simple yet thorough way to both plan soccer exercises, but also to consider communication, differentiation and a session evaluation is inbuilt. 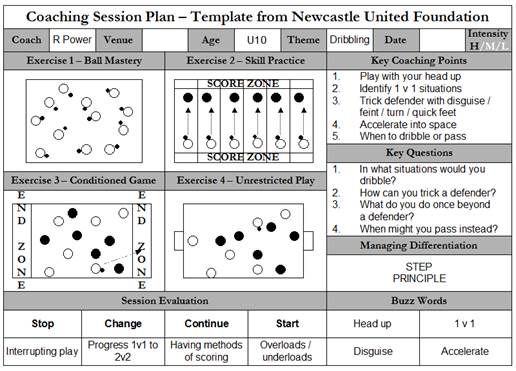 Stage 3 The Training to Train Phase

In the eleven to fourteen age groups, the focus is still heavily on technical work, although game understanding is of increasing importance. Coaches should be building on the ball manipulation and physical literacy work the players should have completed prior to eleven or twelve years old.

The sample technical syllabus I have used here is actually the combination of two syllabi from two different English academies. The reason I chose two is simply because I do not feel that either are sufficient. The first syllabus is presented below in the titles. Each theme is used for six weeks. There is also a sixth block of work left blank for coaches to work on any aspect of the game they feel is required by their specific players. The second syllabus is presented below with bullet points, adding more detail to the type of work that ought to be covered. 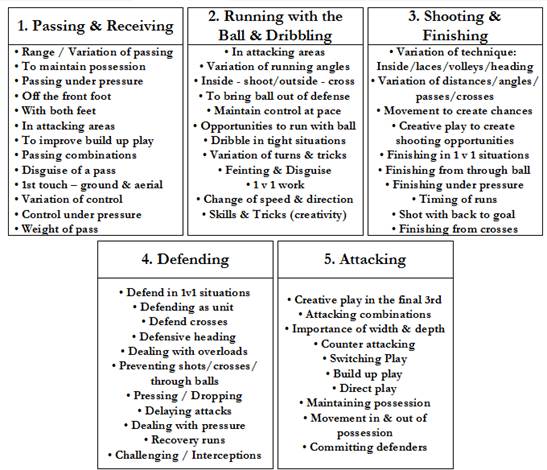 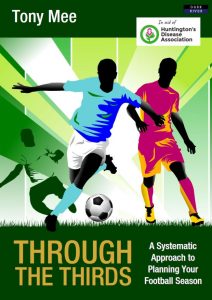 Planning for the season? Check out Tony Mee’s brilliant book.

The session plan used for this age group is from Notts County, a Category 3 English Academy. Both coaches are former colleagues of mine and I consider them both to be students of the game. Both are currently taking their UEFA ‘A’ License. The template reflects the influence of the Premier League’s Elite Player Performance Plan, with coaches challenged to consider the specific tactical, physical, mental, social and technical elements of player development. Each session is then evaluated with scores produced for the performance and application of each player. 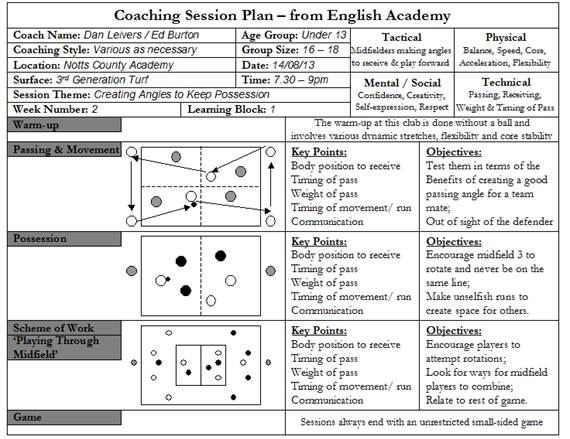 Stage 4 – The Training to Compete Stage

We noted in the previous chapter that soccer starts to replicate the adult game at this age. The technical progression of players remains a central aspect of their development, but tactical issues and position-specificity take on a greater significance. 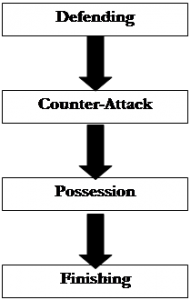 The logic behind the process was that, to play, you needed to be able to possess the ball and therefore, (1) methods of winning the ball back (defending) were prioritized. On the regaining of possession, the team then had to decide whether they could (2) counter-attack, or if not, how they could (3) keep possession. Eventually, either through a counter-attack or through sustained possession, the players needed to know how to (4) score goals (finish).

During his presentation, Edwards openly acknowledged that this process can be debated, and it was up to individual coaches to interpret and work to their own, justifiable methods.

Are you a soccer coach? We have more than 25 titles currently available.

I observed the session plan below being delivered by an international youth coach working with an under-15 national team in Europe. It is a great example of using the whole-part-whole method that we discussed earlier in this book. The main theme of the session was to teach players how to defend deep (sometimes also known as defending ‘later’). 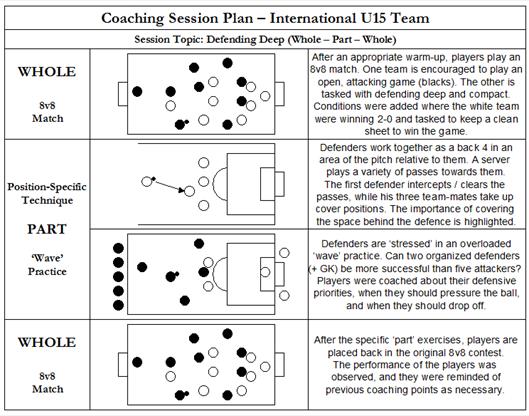 Stage 5 – The Training to Win Stage

From ages 16 to 19, players need to start learning how to win games. For that reason, coaching can become a mixture of both a periodized syllabus and also episodic coaching. An increasing amount of time is spent on tactics and game understanding.

The six-week coaching segment below is from a full-time under-19 college soccer program. Like The Football Coaches Library example above, it shows that, not only are sessions linked, but are organized into technical and tactical chunks. There is also an allotted time for any necessary episodic coaching.

The practice session below is taken from Brazilian club Atlético Mineiro, recorded by World Class Coaching. The specific age-group is the club’s under-17 team. It shows an episodic approach to working with an older age group, and is the team’s preparation session for a game the following day. 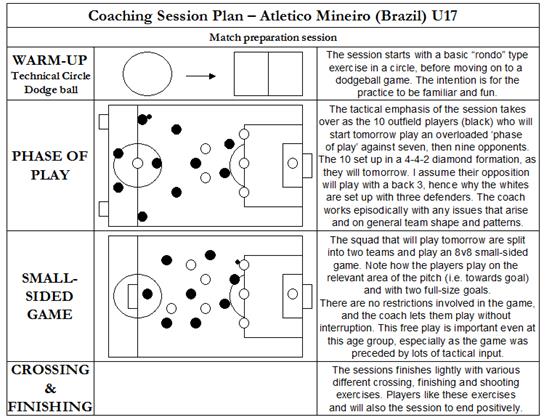 Regardless then of the varying methods of developing a philosophy, syllabus, or of individual session plans – having a clearly defined long / medium-term focus is imperative for all soccer coaches. Otherwise we will coach the same thing over and over again, or just butterfly around soccer topics, without considering long-term player development. Hopefully the examples above, bearing in mind that many, many more exist, will assist you in organizing your coaching to help your players reach peak performance.

Working Within a Syllabus

In the past year I have been coaching a team where there has been a structured coaching syllabus in place to follow. I have found that this environment has helped me improve as a coach especially with the planning and delivery of my sessions. Preparing for my sessions has always been an aspect that I have seen as being very important. It underpins the success of the session you are delivering.

In the past I have been guilty of taking sessions where I have felt that I am under-prepared and this, I feel, has then shown during those sessions. Since I have been coaching with a structured coaching syllabus, it has allowed me to sit down with the other coaching staff and plan out what we are going to deliver in our sessions – sometimes even weeks in advance – rather than planning a session in the car en route to the club.

One of my roles with the team is to take them for an active recovery session the day after a game. This session can sometimes be a little ‘lighter’ than what may be expected at other times of the week, but this is an essential session in order to make sure that the players are recovering from games in the correct way so that they stay physically healthy throughout the season. It is in these sessions where I have been able to use the coaching syllabus and link it into an active recovery. If the topic during that particular week is switching play or creating space, I have been able to test my coaching skills by delivering a session that links directly to that week’s topic.

Although there is a coaching syllabus in place, I still feel that is important to be able to implement my own coaching style on the sessions. As the players are training every day it is key that each coach adds their own style. I have found that this helps keep players enthusiastic and motivated. A new voice can be very refreshing for players.

Although the coaching syllabus is devised at the beginning of the season, there have been times when there has been a cause for change. In the days leading up to playing a team on a match day, I have been able to adapt the sessions to optimize the preparation for the game ahead. This has been the case a number of times this season. Therefore we have been able to focus our sessions around, for example, compactness of defence and counter-attacking. This has allowed us to swap and change certain topics of our coaching syllabus in accordance to our fixtures or the needs of the players.