"We Want The World" is available in print and eBook formats 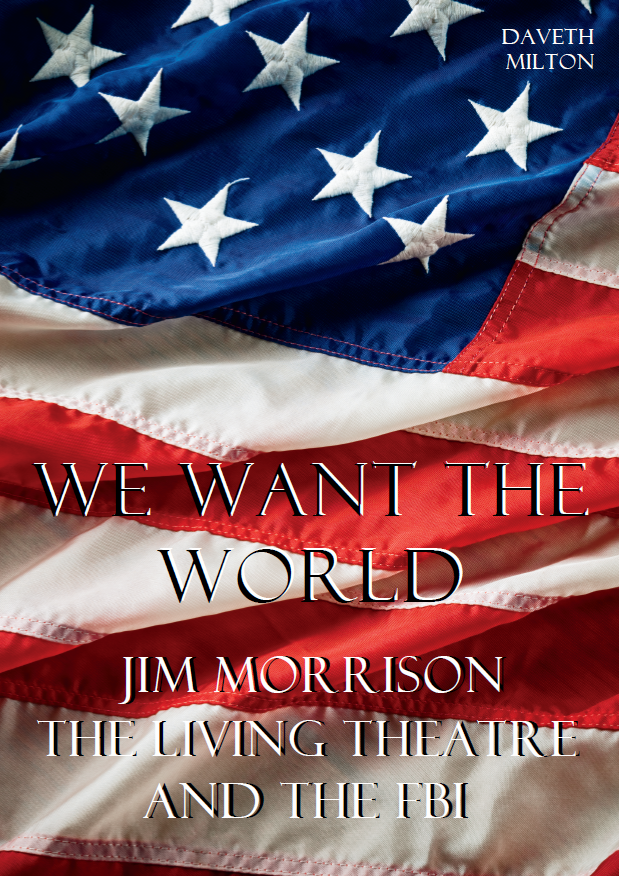 This chapter 2 excerpt was from We Want The World by Daveth Milton. 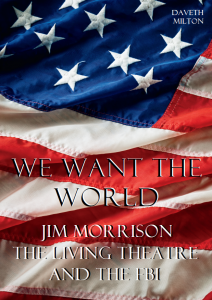 In about the middle of December ‘68, down on Santa Monica Boulevard, Jim Morrison was slumped in a chair with his feet up, reading November’s edition of the west coast activist magazine Ramparts.  Life had been bugging him lately. I mean, what a year!?!

On the face of it The Doors were a real success; the only new rock group on the brink of playing New York’s Madison Square Garden. Yet Jim still felt troubled, ill at ease about his country’s predicament. Martin Luther King had been shot dead in Memphis, the Tet Offensive had come to light in Vietnam, kids had been stomped outside the Democratic convention in Chicago, and another Kennedy was dead and gone. America had become sucked deeper into a whirlpool of pain and Nixon, complete with his special brand of Republicanism, was installed in the White House.

What had Jim done? Talked of revolt, and of freedom. But what was he known for?? Light My Fire and Hello I Love You. And here, on the pages of Ramparts, was a middle-aged anarchist named Julian Beck being interviewed about his own controversial antics, explaining, ‘When you’re an anarchist, you’re interested in the greatest amount of change possible.’ 1 A couple of months later Jim got the chance to see what Julian Beck might mean…

As The Living Theatre’s still-battered Volkswagen train approached the west coast, late in February 1969, Judith Malina got a strange and uneasy feeling. In her diary she noted, ‘Everything in California is very loaded, as in a dream, when a certain scene seems deeply significant but you don’t know why.’ 2

American kids were either seeking violent pathways to revolution or they didn’t care at all. As the home of Flower Power, California was almost too liberal for Paradise Now. Instead of rapping against the State, students made love, smoked dope in their bedrooms, and listened to records. Some of them liked The Doors. Nevertheless, for one week only The Living Theatre brought their plays – culminating in Paradise Now – to the University of Southern California.

Although his fellow Doors never attended the show, Jim went together with a small group of friends which included Michael McClure and the band’s young, blond Canadian manager, Bill Siddons. Morrison bought tickets for all the shows and took The Living Theatre’s advance-man Mark Amitin out to dinner. Just as the North Vietnamese launched a major offensive against one hundred cities, over in California there was a meeting of minds.

On Monday the 24th of February 1969, The Living Theatre performed Mysteries and Smaller Pieces: a harrowing collection of scenes ending in the gruesome enactment of Antonin Artaud’s idea, the Plague.

Artaud was amazing. As a man on the margin between normality and insanity, he lived his whole life disconcerted by the drama of his own body. He refused the division between mind and matter, just as he refused almost every other loyalty on offer – religion, family, logic, you name it. His ideas left an indelible mark on theatre, but his real value was as the maker of poetic metaphors. And the most significant of these, which came in the midst of his collection The Theatre and Its Double, was Plague.

Plague heralded a new reality. For Artaud, theatre could transcend fiction and become life – not acting but action. He used taboo images (death, incest and scandal) to SHOCK audience members into an infectious madness.

Plague, in Artaud’s schema, was a violent and overwhelming crisis with the power to transform a growing number of individuals and eventually all society. The disease became an ordeal helping people to break on through to the other side. They would emerge from it either purged or dead.

The Living Theatre loved Artaud. Even before they knew him, they followed a parallel course and tried to wake up spectators. Judith Malina claimed that the feeling of being taken from a theatrical Brig prison into a real one: ‘…was an Artaudian experience that I think we’ve used within our work.’ 3

When Mary Richardson completed an English translation of The Theatre and Its Double, Beck and Malina were amongst the first to know. By this time Artaud was long dead, but in Paris the Becks befriended his old companion Jean Barrault. Barrault addressed a speech to The Living Theatre when everybody occupied the Odeon. During May ‘68, the students who occupied the Latin Quarter distributed Artaud’s Letter to University Chancellors in which he said society had mummified itself under the chains of frontiers, factories, law courts and universities. Through the revolutionary spirit, it was as if Artaud’s plea for absolute change had miraculously been revived.

Judith said that practicing Artaud demanded immersion in whole-body experiences. In parallel with Artaud’s efforts, Beck and the company’s plague scene became a sustained attack on spectators’ nerves. Over thirty cast members caught in the death throes of a terrible disease would walk through the audience and die right there at their feet. After a few agonizing minutes, other members of the troupe would arrive, two at a time, to take away ‘corpses’. As helpers piled up bodies, stiff as kippers, a scene emerged looking unlike anything since the holocaust.

The Living Theatre always roused their audience with this macabre spectacle. In Europe, kids jumped up and ‘died’ in the aisles on a regular basis just so they could join the body pile; the revolutionary Danny Cohn-Bendit participated in the plague scene of Mysteries in France. Other spectators became hostile and agitated. When Judith played dead she created tension: ‘In America, it was more common to be treated aggressively. I had been kicked, stomped, tickled, had my fingers bent back, and my hair set on fire.’ 4

Mysteries inspired Jim Morrison as he sat in the USC auditorium on that Monday night. Morrison had already encountered Artaud as a predecessor. Their similarities were astounding: the two men followed similar roads to freedom. Not for nothing did Jim’s UCLA film school contemporary, Bill Kerby, writing in The Daily Bruin, call the Doors ‘Artaud rock.’ 5

Jim championed The Theatre and Its Double. He also shared an independent interest in Norman O. Brown, another of the Living Theatre’s influences. Brown, a Freudian innovator, believed crowds underwent a kind of mass psychosis: a plague. Reviewing The Doors in 1967 (before Beck’s US tour) Life journalist Fred Powledge wrote, ‘Everyone with whom I talked about The Doors had made the point their concerts were a lot like The Living Theatre.’ 6

The plague scene from Mysteries stayed with Jim and inspired his next day at work – jamming out surf songs and weird new blues. On what became known as the Rock is Dead session, he began toying with Elvis: Love Me Tender and Mystery Train.7 Rock is Dead implied that corporations had fossilized the last generation’s musical impulse making it too decadent, too self-conscious and too dissipated – unable to evoke real hysteria. Jim was ushering in a new era; inviting people to get right down and die, at least in a metaphorical sense. He would write about the ‘LA plague’, expire on stage in Unknown Soldier, and preface The End by uttering the eerie chant, ‘Bring me your dead! Bring me your dead!’ The idea of forgetting, of giving up your old interests and being drawn into a new contagion, was dear to Jim Morrison. It mapped out his road toward freedom.

And the plague, the mystery, the strangeness, kept going that night when Jim returned to USC to watch The Living Theatre’s adaptation of Frankenstein; an odd, open-text play which evoked an atmosphere of misery and sinister executions to upset the social equilibrium.

Frankenstein ran for two nights, Tuesday and Wednesday, with Beck presiding over escalating terrors as the lanky doctor. The message of the play was simple: can a society born in violence ever survive without it? One actor cawed morosely, ‘There was only one means to overcome the sensation of pain – and that was through death!’ 8 In silhouette, somebody’s heart got pulled out to supply the monster. Cast-member Jenny Hecht looked up, like some vamp from a silent movie. She would reach out her hands and stare with eyes fixed-open like a seer. Everyone would give a great collective shout and watch the hideous freak slowly tingle with electricity. Made from the entrails of the dead, Frankenstein’s creation – a huge acrobatic composite of cast members – railed against its solitude by destroying the set. In an extended finale the actors were then ‘arrested’ one at a time.

On Thursday night, USC was treated to Antigone, Judith Malina’s reworking of the ancient Greek tragedy that inspired Bertolt Brecht. She made the play a straight morality tale. Antigone had a plot that was both elementary and effective: when civic leaders ignore their citizens’ humanity – in this case by punishing Antigone for burying a brother who died in battle – a gruesome comeuppance awaits. Cast members would crawl around in the aisles and Judith always appeared heartbroken in the title role. With tears melting the greasy rim of mascara from her eyes, she resembled a pint-sized Alice Cooper.

Judith’s husband Julian liked the play on personal grounds. Both he and Malina were strong characters off stage. They married after he got her pregnant two decades earlier. However, Julian soon realized he was gay and, despite feelings of fondness and loyalty, he could never quite meet her full passion. Over the years Beck remained a distant, flighty figure, and on one occasion he even scarred his wife’s forehead with a cigarette. In Antigone he got to act the bad guy and it worked out a lot of tension. With apocalyptic reverence, his wife noted that there were earth tremors in West Los Angeles when they started Antigone at 9.00pm.

On Friday, The Living Theatre brought its week at USC to a climax with Paradise Now. Judith Malina reported there was a lot of hassle about money and locals got uptight about fire laws and exits. A decision was made to seal off the balconies and one policeman rushed up and down between the dressing rooms, swearing he could smell marijuana. Julian sensed trouble and asked for his payment in advance. USC refused. They pointed out that advance payment was not in The Living Theatre’s contract so Beck capitulated. After the standoff had kept the audience waiting outside for half an hour – the show went ahead. According to Judith Malina:

‘The audience, not politicized, got politicized by the situation. They did come up on stage and there wasn’t anything the fireman could do that wouldn’t have started real trouble. And when the people in the balcony felt the restriction, the children of Paradise lowered a rope and came down into the orchestra, evading guards at the door, and a wild cry of liberation rose up, and everyone felt the example of revolutionary protest was defined.’ 9

Although The Doors’ manager Bill Siddons felt intimidated, Jim loved the show. Sitting in the front row, a lucid, subversive and mischievous Morrison greeted events around him with great enthusiasm.

When everybody stood up, the fire marshal walked out. Then one disgruntled lady beat an intimidating actor with her umbrella. As she got ready to leave, Morrison grabbed her hat and threw it back into the crowd, who applauded his action.

Paradise Now carried on well beyond 11.00pm. It made history at USC as a night of revelry and inspiration – a rock’n’roll moment.

Because they knew the local police were aware of their reputation, the company avoided going nude. Nonetheless the performance was a triumph: ‘Forty police cars surrounded the building. The play proceeded in peace. The audience left, exiting between rows of armed-to-the-teeth LA cops with walkie-talkies. Great exhilaration.’ 10

Finally, after leaving the auditorium, Jim Morrison stumbled back toward Hollywood, charmed.

This chapter 2 excerpt was from We Want The World by Daveth Milton.