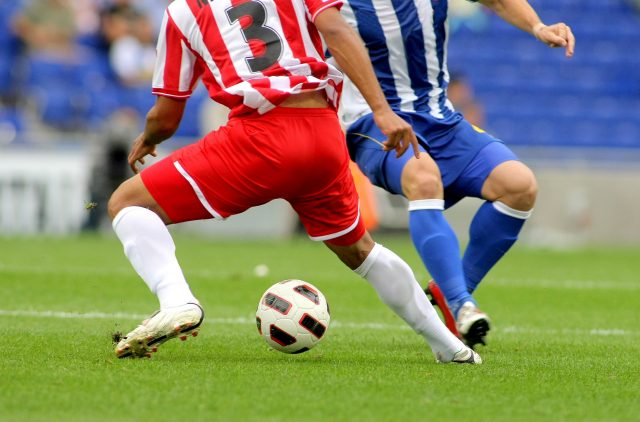 Game-calls is a term used to describe the type of game-specific communication or ‘words’ players  can shout to one another on the pitch during the game, to inform a player on what to do next. Game-calls are used in everyday training sessions and games with players and coaches using said ‘calls’ to represent moments like ‘give me the ball to start-again’. In fact, this call can be phrased as “Start-again!”, with alternatives being “Turn!”, “Time”, “Squeeze” and so on.

Many coaches, particularly at non-professional level will use these phrases to influence a player’s decisions and behaviour in relation to a situation. But how many actually train their players in using these terms? And by train I mean devise their whole training sessions around the players using game-specific soccer language to govern the ball, keep possession, regain possession, and score – to support the types of decisions we want them to make in line with our playing style. The answer is not many.

From what I’ve seen, coaches who do train their players to communicate in a style that represents their ‘playing philosophy’ includes some of youth soccer’s greatest coaches and coach educators. Dick Bate does. Dick was previously the FA Elite Coaching Manager and former Cardiff City Academy Manager, and is widely regarded as one of the best soccer coach educators and professors of the game in the world!

Dick is constant in his simple message on how players can work better as a team to be clever and creative. This is shown by his own mastery of communication in using specific footballing ‘terms’ which he utilises to stimulate his players into thinking about the way he wants them to play. Others who are well known in soccer circles, but perhaps not at a public level, include the likes of John Cartwright, former England Youth Coach and ex-Arsenal First Team head coach and Roger Wilkinson who was amongst the first to have introduced methods where players ‘communicate whilst playing’ to develop expert decision-making. Roger coined the phrase “playing in the future” (see Chapter 5).

The best coaches communicate their messages in such a way that their players transfer understanding from training onto the pitch during a game.

How do I develop my own coaching language?

This is a question that cannot be answered fully here – as it’s down to what you believe! How do you believe soccer should be played? What I can do, though, is share some ideas on the types of words you could use to mirror a playing philosophy that is based on players playing “exciting possession-based fast attacking football”. This philosophy sees players keeping the ball in all areas of the pitch, and utilising every individual on the pitch regardless of their position (where necessary). This playing philosophy is one that many of the world’s greats are accustomed to; it incorporates high pressure where possible, and a clever understanding of ‘transition’ that sees the team working hard to win the ball back (as hard as when they’re in possession to keep it). Regardless of whether you want to play this way or not, your coaching philosophy – across all ages and player abilities – must include the following traits:

– Player-ownership. Encourage players to take control of their decisions and play with confidence, whilst being responsible for the decisions they make.

– Feedback and growth mind-set. Players who are unified in responsibility and accountability are the ones who will become leaders in their own right. But this can only happen if you (and they) see mistakes as an opportunity for reflection, growth, and learning.

– Boundless enthusiasm. It’s not just the players that should love what they do, but you as the coach should demonstrate your love for work in everything that you do and say. It’s not just how you interact with players or behave in general, it’s your approach to your life and work that tells them you care!

– Listen to players.Some coaches think they have to be the ones who provide the answers and feedback, but actually this isn’t the case. Let the players sometimes share with you what they think, and how they think ‘we’ should provide a solution and act next. Some managers fear this as meaning they have lost control or that they don’t know the answers but actually this shows that not only can you give instruction, you can also listen and take it yourself – the act of a true leader.

– Awareness of what you say and how you say it. You must be aware of the words you use to describe key moments in the game as what you say forms the entire coaching intervention and message you send and receive! Always ask yourself, does this fit with how we want to play? Because this is what you will be judging your players on, and they will be judging you on the same concepts.

Once you have a clear playing philosophy and coaching style, then you can form the words you wish to use (i.e. game-calls) around the vision of how you want your team to play. These words are what the players will use in order to achieve ‘player-ownership’ as discussed above, and must be simple, so that both the manager and players understand their meaning, context, and timing. The words must allow players to “play in the future” which means they can make decisions on ‘time’ and ‘space’ limitations by recognising and anticipating key triggers or visual cues from the game. This ensures that players can respond to the game by informing their teammates on what to do next.

An example of this might be when a player is in support of a teammate in possession and identifies that they can’t play forward due to good opposition defending that restricts a forward pass. Therefore, rather than risk losing possession by playing a ball which is likely to be intercepted, the player off the ball can shout “Start-again” – which signals to the player on the ball to ‘play backwards’ to keep the ball, thus retaining possession. This not only allows the player to play ahead of himself, but also ‘demand the ball’, a central issue highlighted in the previous chapter.

The key for you, as a coach, is recognising and helping players to recognise when it’s best to ‘start-again’ and when it’s best to ‘play forward’ through your use of coaching interventions and the design of your coaching practices (see Chapter 6). The start-again is a useful part of playing as it allows the team to keep the ball and re-start the attack from a different angle. It can also draw the opposition in so the ball can be played behind them. It is vital that players are aware of the importance of ‘playing forward’ because ultimately they can’t score by playing in their own half all the time. At some point, the ball needs to go forward into the opposition’s half and in the back of their net for you to score. It’s how you play forward that counts!