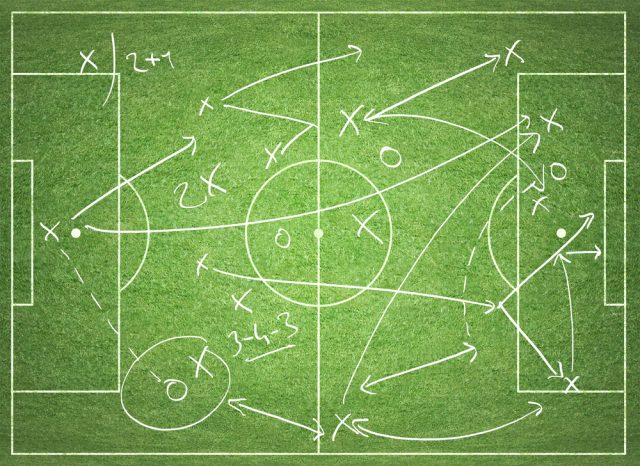 Once every decade or so, a team emerges that amazes the world. And, once a generation, a team emerges that creates a new era in football. The new era leads to revolutionary tactics and ideas that break with the ‘status quo’ of the game and which drive new schools of thought, analysis, and training.

One of these legendary teams, and one of these playing revolutions, was implemented by Futbol Club Barcelona during the 2009-2010 season. A team managed by Josep “Pep” Guardiola Sala.

Pep Guardiola and his team amazed the world with an unprecedented style of football. At the time, only a few could see beyond the technical excellence, the taste for overwhelming ball possession, and the high pace of play (dubbed ‘tiki-taka’ by the press).

Note: It is important to highlight the opinion of Guardiola about the term ‘tiki-taka’. He has said, “I hate ‘tiki-taka’. I hate it. Tiki-taka is to pass the ball for the sake of it, with no intention. And that is useless. Don’t believe what they say. Barça had nothing of tiki-taka! That’s an invention! Ignore it!” Taken from p149 of ‘Herr Pep’, the book written by Martí Perarnau exploring Pep Guardiola’s first year at Bayern Munich.

Over time, a few authors started highlighting the key tactics of Pep’s model, but a deep and thorough analysis of each part of his model did not spread through the football community. As a consequence, most coaches, journalists, players and managers have taken the visible ‘superficial’ factors from the tactical offerings of Guardiola and misinterpreted the true identity of this model of play.

This is a phrase heard on many occasions, over the last few years, on football pitches of all levels, from Under-12 to the highest leagues.

Carlos Pouso, ex-coach of UD Logroñés referred to Guardiola’s Barça, on the 5th of December of 2014, as follows: “Here nobody lets you play. Forget about it… This is turning into a sort of “philosophy of the game”. I hear players talk about their way of playing and, funnily, when they play against my side I don’t see it: playing from the back, combination play… We have to cut out the nonsense. That Barça of Guardiola has done a lot of harm to football because they played so wonderfully well that now there are lots of imitators that are a disaster. For my liking, this Barça plays very well and Real Madrid are fantastic. Now it seems that if you don’t do rondos in your own box, even when losing 0-3, you don’t play football. My team will keep playing without doing rondos in our box.”

He continued, “Teams that ask center backs to play out without any sort of mechanism, teams that play 1–4–3–3 where the distance between lines is huge, teams that, in their eagerness to keep possession, play horizontally or even backwards until they lose the ball. Like that again and again. Teams that play rondos during training sessions without any transference to their model of play. Teams that do drills with one or two touch limits, minimizing the decision-making capacities of the player… a cluster of nonsense… consequences of Touch! Touch! Touch!”

Guardiola’s approach involves remarkable challenges in technical execution and high complexity in the holistic interpretation of the model of play. This book is about more than the specific features of the Pep Team and the direct link to the group of players he had under him; it is about the Pep Dream. It is to be understood as the ‘system of interactions’ that create a collective behavior. As a consequence, coaches who try to get their teams practicing Guardiola’s style of play without backing it up with a clear and detailed model of play will simply sink. Those teams are the caricatures of the Pep Team that have proliferated in the last few years with very little effect.

Can you play like Pep’s Team without players as technically gifted as Xavi, Iniesta or Piqué?

Yes. Without a shadow of a doubt. However, it is also true that a minimum playing capacity in team members is needed to develop this model of play, although you can play the Pep way with players of medium abilities. It is also true to say that by playing the Pep way, players’ progress will accelerate, and their overall technical capacities will grow. In turn, the cognitive capacities of players and the commitment of the squad to the plan will be key variables in the learning process and how quickly things can come together for you.

This document seeks to gather Guardiola’s model of play at Barça – structured in Principles, Subprinciples, and Sub-Subprinciples – to plan the acquisition of these elements during preseason and to present a methodological framework in the context of Tactical Periodization.

The four seasons that Guardiola spent in charge of the first team at Barça witnessed extraordinary richness and tactical variety. Every few months you could observe the team reinventing itself on the blackboard and on the field. That’s why I wanted to choose the 2009-2010 Barça vintage; although subsequent teams maintained identical key principles, this was the best team to explore, in this book, with regard to technical demands. It was also the last season when 1-4-3-3 was the predominant system at Barça and the first when Lionel Messi’s role as center forward became permanent and pivotal.

Play Like Pep Guardiola’s Barcelona: A Soccer Coach’s Guide is a title that aims to provoke the reader; taking aim at the ingenious attempts of many to imitate or copy the genius that is Pep, often without understanding the complexity of the tactical revolution that is involved. This book intends to thoroughly analyze the model of play of Pep’s Team, and to present a methodological training framework that can be put into practice with a grassroots, amateur, or semi-professional team. Let’s get started!

Pep Guardiola once called himself a “thief of ideas.” However, I prefer to see him like a ‘chef.’ Akin to the great chefs in history, he went to the market, meticulously chose each of his ingredients and – once in his kitchen – prepared the dish that he had dreamed about for so long: “the Pep Dream.”

Let’s have a quick look at the market stalls that Guardiola visited as he sought out his ingredients.

We have to go all the way back to Jany van der Veen, Ajax youth coach, and discoverer of Johan Cruyff, to begin to see the first traces of what would become positional play. Under van der Veen, ‘immediate pressure’ after losing the ball was a distinguishing mark of his teams in the Ajax academy in the late 60’s.

Rinus Michels – Mr. Marble – manager of the Dutch national side at the 1974 World Cup in Germany, demonstrated a constant interchange of positions and a pressing defensive zone, transforming the way of playing soccer. He called it “play,” the football universe wisely called it “total football.”

It was 1990 when a young and skinny midfielder – Josep Guardiola – was called into the Barcelona first team, managed at the time by Johan Cruyff. Six subsequent years of living, talking, and training carved his character and gave him a most privileged way of understanding the game. The third man, width, pace, constant support and the rational occupation of space are some examples of what that historical “Dream Team” was all about. Guardiola was Cruyff’s best example of a Dream Team player.

Later on, during his career at Barça, another master of positional play arrived… Louis van Gaal. There is no doubt that Pep, whilst maturing as a player, was further able to carry on collecting knowledge about tactics and training methodologies whilst working under the Dutchman. Van Gaal, the new tenant of the culé bench, had been manager of the European champions in 1995 with a very young Ajax side, always structured in triangles in his 3-4-3 playing system that enabled the team to build up long periods of possession. Van Gaal advocated patience to find the necessary space to arrive at goal, either from the sides or through the middle. One of his favorite sayings was, “I don’t train for the legs, I train for the brain.”

The contribution of Barça Manager Frank Rijkaard on the club’s Model of Play is also important. Guardiola’s predecessor instilled essential aspects to the team such as becoming organized through possession of the ball, and the extraordinary “6 seconds of pressure” (when Barcelona would press at full speed for 6 seconds after losing possession in the opposition’s half).

Maybe the secret ingredient in the Guardiola recipe, however, comes from Pep’s experience in Mexican football. Juan Manuel Lillo, coach (in 2005) of the still-playing Guardiola for the Mexican Dorados de Sinaloa side, is an accomplice to Pep in seeing the game as a constant search for spatio-temporal advantages. Ideas such as “Positional Play consists of generating superiority behind the pressing line. Everything is much easier when the progress of the ball is clean.” are the genesis of the model of play that amazed the world.

Not quite happy with all the ingredients detailed, and keen to complete his menu, Guardiola also added a pinch of Sacchi, a bit of Menotti, a teaspoon of la Volpe and the always inspiring scent of Bielsa.

The table is set.