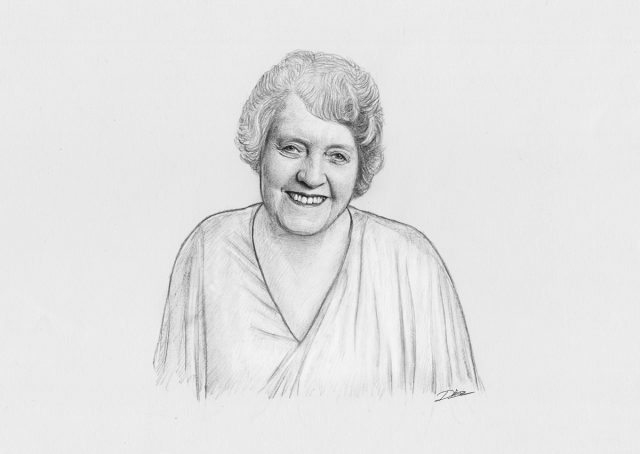 Doris Stokes (nee Sutton) was a professional medium and British spiritualist who was born in January 1920 in Grantham, Lincolnshire, England. Following her marriage to husband John, she became known as Doris Fisher-Stokes; her professional name was shortened to Doris Stokes by her book publisher (so that it would fit on a paperback book better).

Her television appearances (including “The Terry Wogan Show”, and Granada television’s [1983] “An Evening with Doris Stokes”) and public performances brought her fame in both Britain and Australia. Doris became the first-ever medium to perform at the London Palladium, where the tickets were sold out in around two hours; she also sold out the Sydney Opera House. On the 12th of April 1985, Doris appeared on BBC Radio 4’s “Desert Island Discs”.

Doris claimed in her memoirs that she had been seeing spirits and hearing disembodied voices since her childhood. She also stated that these abilities were further developed after she joined a spiritualist church. That was after one of her sons – John Michael – had died at a tender age.

The Spiritualists’ National Union recognized her as a practicing medium in 1949. However, Doris gave up being a medium in 1962 and trained as a psychiatric nurse. She later retired, after five years, following an attack by one of her patients. She then went back to psychic work and became a resident medium in 1975.

With a famously down-to-earth style, straightforward character, and ready smile, Doris published her first autobiography in 1980, “Voices in My Ear: The Autobiography of a Medium.” That sealed her standing in the eyes of the public across the United Kingdom. Over two million copies of her famous book were sold.

Naturally, many sceptics felt that Doris Stokes’ abilities were not through psychic functioning, and could be explained through a mixture of more universal techniques including ‘cold fishing’ techniques and audience plants. James Randi famously called her a “liar” on the “Don Lane Show”, prompting Lane to walk off set. He later explained that whilst he was not in a position to make a call on Doris’s psychic abilities, he was not prepared to have her insulted as a person.

Those who worked closely with Stokes, however, never reported any evidence of fraud, despite significant financial inducements from the media to ‘spill the beans’ and do so.

Doris’ health had been poor throughout her lifetime. She underwent thirteen cancer operations, including a mastectomy. She never woke up from surgery in April 1987, following efforts to remove a brain tumour. Doris Stokes passed away in London on May 8th 1987.

Doris was the titular author of a number of successful “Voices” books, ghost-written with journalist Linda Dearsley. In December 2019, a new book title – “Voices Everywhere” – detailing Linda’s time working with Doris will be published, and how echoes from Doris continued to resonate across Linda’s life, following the death of Doris.

Do you want to know more about the extraordinary Doris Stokes? Read the amazing biography from Doris’s real-life writing partner Linda Dearsley. Click on the cover to learn more!