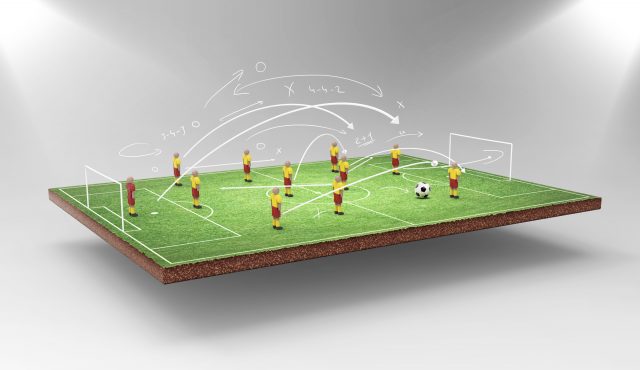 “It is not a question of 4-4-2 or 4-2-1-3, it is a question of having a team which is ordered, in which the players are connected to one another, which moves together, as if it was a single player.” (Arrigo Sacchi)

It is especially important, when reading this chapter, to remember the key stages in the development of youth football players. It is also fundamental to recall how we can use the implicit and explicit teaching methods from chapter 3. The coaching focus when working with younger players is on technique. Without this technical development and subsequent skill development, carrying out tactical work is extremely difficult.

There is a shift in focus towards tactical training as young players progress through their development, so giving complex tactical information to a 10-year-old, considering the traits of a child at this age, is not productive. See below the ages that players in some of the most renowned academies in Europe begin their tactical training. This information comes from the European Club Association’s Report on Youth Academies in Europe.

Tactics Through the Age Groups

Tactics can be taught to younger players, but in an implicit manner. They can be taught without using uncontrollable jargon and without having wildly over-the-top expectations. For example, 4 v 4 or 5 v 5 games can be used to teach all players basic concepts of attacking and defending. Rotating players positionally, rather than pigeon-holing them early, will help them experience different positions.

Young players must first understand individual tactics, before moving through group or unit tactical understanding, and ultimately then – towards their mid to late-teens – team tactics.

Individual tactics are those employed by players when they are on or in close proximity to the ball. They usually relate to a player’s decisions and performance when 1 v 1 against a direct opponent, both in possession (1 v 1 attacking) and out of possession (1 v 1 defending) of the football ball. In a wider sense, individual tactics can relate to decision-making around whether to dribble, pass, shoot, etc., how to support a teammate who is in possession, and communicating to ask for the ball.

The stronger a young player’s individual tactics and decision-making, the stronger he will fit into his unit and ultimately, his team. The Grassroots coaching section of the FIFA website, although needing a significant update, summarizes these “simple principles that a player learns in order to make the best decisions during a particular passage of play”.

Once technique and individual football tactics are learnt and mastered, and as the players age, they can start to have a greater focus around the ball. The coach can begin to work on small group or unit tactics. The focus here is on the relationship between individuals that occupy similar spaces on the pitch. This may be the relationship between partners (for example, two centre-backs or two strikers), their unit (defence, midfield, attack) or between members of other units that affect each other (for example the full-back and winger).

The principles of cause and effect can be understood more at this age, with players able to grasp that an action they make, has an effect on those around them. Brighter players will further understand that the decisions made by others have consequences for them. This may be in terms of positioning, supporting the ball, and attempting to work out what might happen next.

Team tactics is the tactical method we understand most from watching games and analysing formations, systems of play, styles of play, etc. When we discuss tactics, it is the whole team that we tend to focus on. Within team tactics, we can zoom in on both group and individual tactics, understanding that these small parts make up the overall tactical performance of the team.

Explicit tactical training sessions involving the whole team should not be completed before 12 to 14 years old. Even at that age, players will be new to this type of training so patience is needed. A young player’s mind is now being asked to think beyond his own decision-making, and take into account the players around him and away from him – something that needs practice and lots of time to master.

In England, Holland, Germany, Italy, France and Spain – considered to be the most powerful and successful European football nations – they base their game formats around the same building-blocks of 7 v 7, then 9 v 9, before youth players graduate to the full 11 v 11 adult-sized game. The nations vary between playing 4 v 4 or 5 v 5 at the youngest age groups.

The Belgian FA has clearly and carefully considered a measured approach to developing their players tactically through their youth development process.

For coaches or clubs that are keen to implement a one-formation development process, consider not just the 11 v 11 formation you will implement, but also the set-ups used pre-11-a-side.

Above, we see that the 4-2-3-1 system from 7 v 7, through 9 v 9, then eventually 11-a-side is interlinked, so players are exposed to this way of playing from the earliest opportunity. Remember at 7 and 9-a-side levels, tactical learning will largely take place implicitly. In 7-a-side, although players 2, 3, 7 and 11 and not in place, players 5, 6, 4 and 8 will provide width, hence sampling the duties of these players. So numbers 5 and 6 will adopt the role of a central defender and full-backs (2 and 3), and 4 and 8 adopt the roles of central midfield players, but also provide the width of players 7 and 11.

A one-formation youth system, however, is not agreeable to everyone. There are those within the game who rightly feel it is far too restrictive and that players need to have a more rounded tactical development. When working with your players, carefully consider whether you want to expose them to various systems of play throughout their development (remember that this needs to be periodized and structured, rather than jumping episodically from one formation and style to another) or whether, like Ajax and Barcelona, you wish to focus on variables of the same system.

Thomas Tuchel for example, former youth coach at Stuttgart and Head Coach at FSV Mainz 05 at the time of writing, outlined his view in an interview for BBC 5 Live podcast Developing the Individual:

“…we in our club have to take care, in my opinion, that we don’t put the system over the talent and over the individual talent and skills of the youth players… If I have an excellent number 10… it is necessary that we put him there and we develop him there, no matter if the first team plays at this time with a number 10 or not.”

What we must realize however is that tactics are much, much more complex than a combination of numbers on a tactics board. Tactics, as so clearly explained by Jonathon Wilson in Inverting the Pyramid, are “a combination of formation and style” – so, they are a merging of the numbers we use to describe our formation and the style of football we wish to implement. In addition, tactics are a culmination of player strengths, movements and decisions.

By using the formation alone to define our tactics we are really saying very little. Contrast Barcelona’s 4-3-3 under Guardiola with Chelsea’s 4-3-3 under Mourinho during his first spell at the club for example. The former played with a free-flowing passing-style, the latter a more direct, functional style – and ultimately both were very successful.

For the most part, the numbers we speak about in tactics are just that – numbers. A back 4 for example is rarely now made up of four defenders. You could easily convert Barcelona’s 4-3-3 into a 2-3-2-1-2 if you became obsessed with the numbers game. The question is – does it really matter what numbers are attributed?

I was recently given a document called Playing 4-3-3, which has been attributed to Dick Bate, easily the best coach, coach educator and football mind I have been able to work with. He presents a thought-provoking answer to what I have called “the numbers game” visually, showing us how different interpretations of the same formation over the last decade have been used (to bring this up-to-date, and offer another variant, I have included the Barcelona one at number six):

Again, some of the “4-3-3” formations above could be called something else. You may call Arsenal’s 4-2-3-1 for example, or AC Milan’s, a 4-4-2 Diamond Formation. Ultimately, however, it really does not matter what numbers you use, what matters is the style the team possesses, the players you have, and the traits, movements and decisions made by these players within that formation. It is only when we throw the shackles of the numbers game off that we can really begin to understand football tactics.