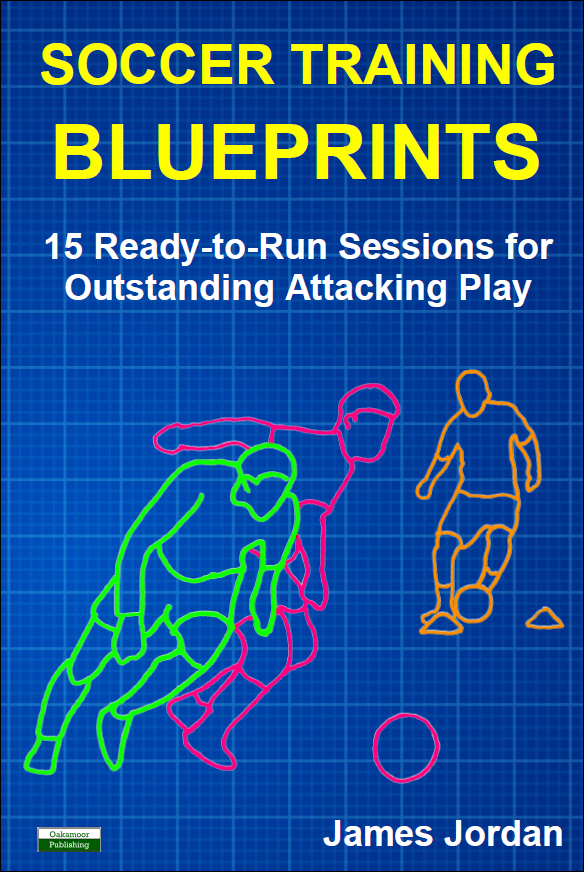 We have more than 25 soccer coaching titles currently available.

Activity: This activity is a progression from the previous one, which will allow you to give your players a quick water break and then get straight back into action. This time, start with a “bandit” whose job is to stop players from dribbling through the gates. Change the bandit every 30-45 seconds (get them to keep score of how many balls they kicked away). 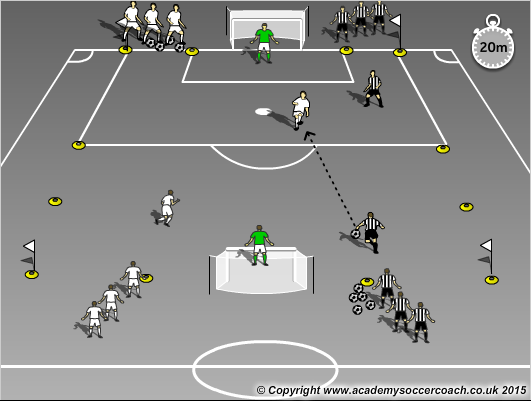 Activity: Divide the players into 2 even teams. Have one team line up opposite each other (see the diagram) behind the 2 cones level with the edge of the 6-yard box. Have the other team do the same on the other side. The balls should be divided equally and diagonally (per the diagram). To begin, you can play the ball into the middle. Players go to the other line once they have had their turn (e.g., attacker goes to the other attacker line). Any time the ball crosses a line (side, end, goal), the team whose possession it would be restarts the game from their side with a new pair (the defending pair stays in). Also, any time a ball crosses the end line from a shot (including a goal), the shooter must run around the corner while the 2 defenders drop out (the attacking team now becomes the numbers down defending team), and a new attack begins by 2 forwards to make it 2v1 (with the recovering defender who just shot the ball running around the corner). Play first team to a set number of goals (e.g., 5, 7, 9) and give the losing team a consequence. After the consequence, you can ask the guided discovery questions, while the players catch their breath. This game will take a few rounds for the players to understand. It is very important that you are consistent with the rules. I find it helps to communicate early and often; for example, if the ball goes out of play, I will say “red team’s ball.” Also, if someone forgets to run, I will remind that player (e.g., “Janie, you have to run”). If she influences the play, I will award a penalty kick to the other team, which will transition back into 2v1 continuous immediately following the kick.

Soccer Session #15: Introduction to Getting Numbers in the Attack – End of Practice Scrimmage: Get Over the Halfway Line! 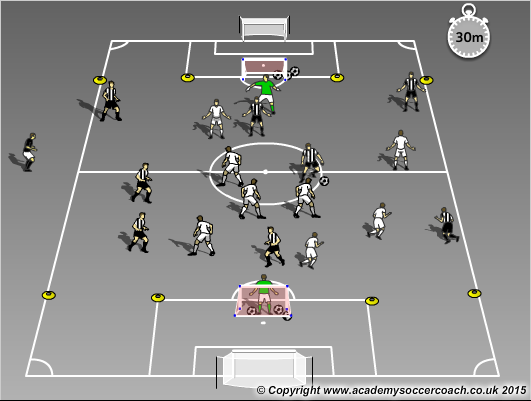 Time: Approximately 30 minutes (or whatever is left of practice).

Area: As per the diagram, extend the 18-yard box out to the sidelines. This makes for a shorter, but wider playing area – perfect for working on crossing and finishing.

Activity: Use (or make) a halfway line and state that all players (except the goalkeeper) must be past it in order for a goal to count. This simple rule, more than anything, has the ability to teach players to get up and support the attack. Don’t scream and shout at your players to “push up” over the halfway line. Just watch and listen. The first time that a team scores a goal and it doesn’t count because one of the attacking team’s defenders was in his own half, players on that team will start telling each other to “step” and “get up”. It works like magic! Play even numbers and arrange teams in a formation that reflects your desired game day formation.