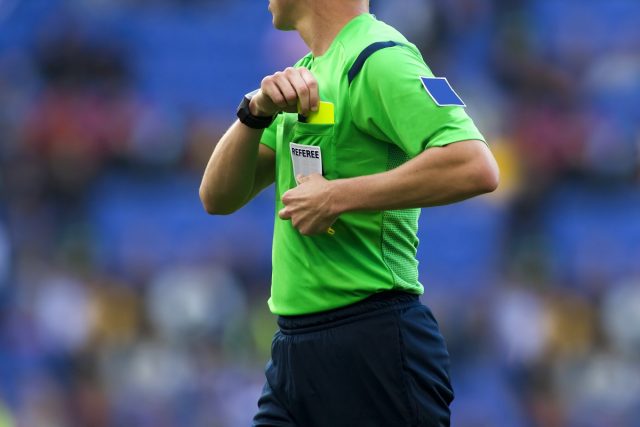 Game management is the use of two things. First, the use of effective communication skills in order to positively influence the game. These communication skills have been identified as gaze, posture, movement, and verbal explanation.[i] The ability to do these things efficiently is not only important in minimising negative emotions (as a failure to explain a decision in an appropriate manner may increase player aggression and then, in turn, referee frustration or anxiety) but also instrumental in career progression.[ii]

This leads us to the second aspect of game management: knowing when to strictly enforce laws and when not to. In essence, to exercise common sense. Those that know when to be a law-enforcer, and when to be a game-manager, are more likely to progress as a referee. Indeed, referees in Germany’s Bundesliga see their role as weighted more towards game manager than law-enforcer.[iii]

It is also worth noting that the interpretation of an event in a football match may not always be attributable to the referee. For example, before the 2010 World Cup Final, Webb was advised by FIFA officials to ‘understand the players’ emotions’ and to ‘keep the cards away for as long as possible’.[iv] In the 109th minute – the game went to extra time – Webb sent off Dutch defender Johnny Heitinga; however, many claimed that Dutch midfielder Nigel de Jong should have been shown a red card earlier in the game. Perhaps Webb felt he no longer had anywhere else to go and that his only course of action was to send Heitinga off. Simply, there was no further scope for cognitive change. Or perhaps Webb interpreted Heitinga’s action not as a violent or reckless act but as a way to fix the mistake of not sending off de Jong, and escaping a negative evaluation from FIFA officials?

Criticism from such high office may promote negative emotions to a much greater extent than from other areas. For example, it has been found that referees find aggressive acts from coaches and players harder to cope with than aggressive acts from spectators.[v] This is explained by the referee perceiving the abuse from coaches and players at “a more personal level, whereas that of the spectators was perceived as coming from an anonymous, ignorant mob.”[vi] Consequently, an individual may be more likely to change the meaning of an event if they are influenced to do so by significant others. In other words, if FIFA officials request patience and tolerance, a referee is more likely to interpret an event with these qualities than if they are not encouraged.

It is likely that some reading this chapter will still disagree with ‘game management’; that the referee should simply enforce the laws of the game strictly. Whilst this is a valid opinion, those that hold it need to be aware that even when a referee adopts this approach they are not immune to criticism. Mike Dean is an obvious example here.

Dean is a referee who is often criticised for being too harsh or ‘card-happy’. Even former FIFA referee and PGMOL boss Keith Hackett has criticised his style, claiming his “tolerance levels are low.”[vii] Statistics appear to support this; Dean, as of February 2019, had shown nine red cards in the 2018/19 Premier League season, which is four more than the next highest referees (five by both Michael Oliver and Jon Moss). He is the referee who has shown the most red cards in the history of the Premier League (100). Hackett advises that better ‘game management’ would benefit Dean.

However, the benefit of being such as a rigid law-enforcer (as opposed to a game-manager) is that consistency is increased at the cost of being pedantic or a stickler for the rules.[viii] It’s a tough situation for referee. Damned if you do, damned if you don’t!

[vii] Hackett, K. (2019). Card-happy Mike Dean should try a quiet word rather than going to war with misbehaving players. https://www.telegraph.co.uk/football/2019/02/04/card-happy-mike-dean-should-try-quiet-word-rather-going-war/. Cited on 06/02/19 from the World Wide Web.