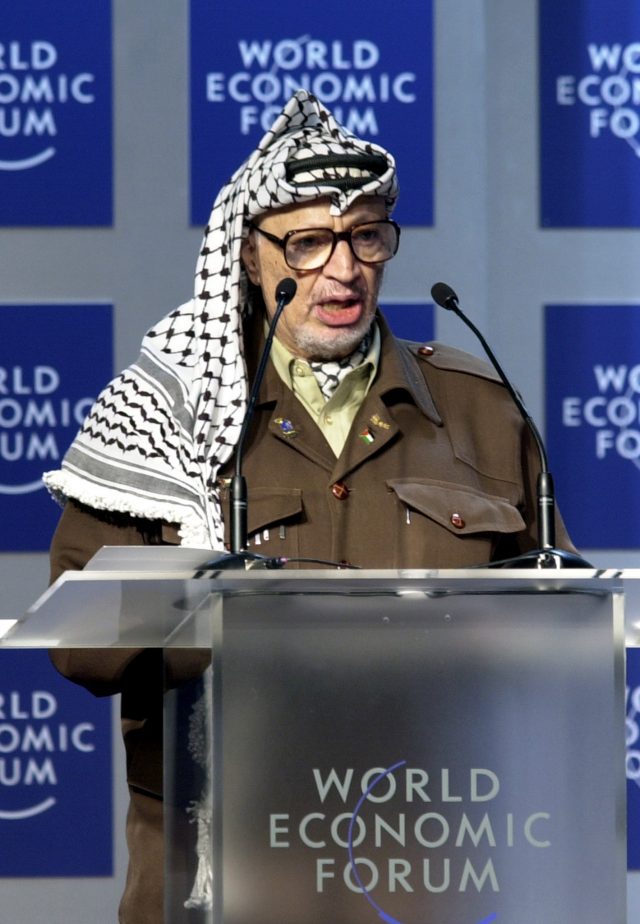 From the acclaimed book: 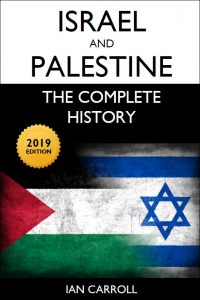 Yasser Arafat was born in Cairo to Palestinian parents on the 24th of August 1929, the fifth son of a businessman. Arafat is the place of a holy shrine near Mecca and was the name given to the boy to show his Islamic piety. The name Yasser was his family nickname and, ironically, it means calm, easy-going.

This element of Arafat’s nature would allow him to endure the endless negotiations and in-fighting which beset the Palestinian nationalist cause, and was indicative of his ability to stay at the head of the movement as chairman.

After the death of his mother when he was just five-years-old, Arafat was sent to live with his uncle’s family in the Palestinian quarter of Jerusalem.

Four years later, Arafat returned to Egypt and as a young man enrolled on an engineering course at Cairo University. It was there that he began to display his militant tendency, aligning himself with the body of student politics, whilst waging low-key guerrilla warfare on the weekends, crossing the Suez to join attacks on the infant Israeli state in 1948.

Continuing with his studies, Arafat chaired the student union and joined the radical Muslim Brotherhood organisation which later figured strongly in the 1956 war against the allied Israeli, British, and French forces.

In 1958, encouraged to leave Egypt because of his guerrilla activity, Arafat and a group of friends moved to Kuwait to put their degrees to good use, while forming themselves into a group they named FATAH, meaning ‘conquest’.

President Nasser supported the establishment of the Palestine Liberation Organisation (PLO) in 1964, hoping to unite the Arabs in a cause to aid their displaced and put-upon brethren.

Following the debacle of the Six Day War, when the regular armies of the Middle East were humiliated by Israel, Arafat chose to change tack. Having witnessed the inability to inflict outright military defeat on the Jewish state, Arafat turned instead to irregular forces.

Arafat installed himself as the Chairman of the PLO and led the fighting at Karameh where, aided by the Jordanians, the guerrillas inflicted heavy losses on the Israelis, killing 24 soldiers, and giving their own cause a massive boost in the process.

Young disaffected men flocked to join the movement on the back of that success and, in the hills of Jordan, they were trained to fight the Zionist entity.

The Palestinians, flush with new recruits and protected by their Jordanian allies, became a state within a state, and threatened the reign of King Hussein himself.

When Arafat later approved the actions of terrorist groups such as the PFLP and brought trouble to the door of the host nation, the PLO was expelled, finding sanctuary in Lebanon instead.

All the while, Arafat raised his profile. When the world media was drawn to the cause by plane hijackings and other headline-grabbing, if notorious, acts, Arafat was there as the public face of the legitimate side of the struggle.

As a figurehead, Arafat was a great asset for the Palestinian people. He was one of the most recognisable people on the planet. He portrayed himself as an Arabic Fidel Castro, appearing in army fatigues and always sporting his keffiyeh headgear.

Whether he was speaking to the United Nations General Assembly, the Pope, a King, or a world leader, Arafat always presented himself as the humble spokesman for a disparate group of refugees.

It was this humility, and his generosity, that allowed him to spearhead the campaign for a Palestinian homeland for more than four decades. Another reason for the unchallenged duration was his dictatorial style. He held tightly onto the reins of power, and he discouraged anyone from promoting alternative leaders.

Even when he was exiled to Tunis, and his loyal aides were picked off in the Israeli backlash to the continued campaign for independence, Arafat still remained the focal point for his people.

The first Gulf War in 1990 appeared to dent his public aura when Arafat made the mistake of siding with Iraq in the war with the Western Allies. Even Syria knew better than to support Saddam Hussein, the brutal gas-master.

Paradoxically, this weakened the PLO to the extent that Israel viewed this as the ideal time to negotiate. Also, with the emergence of Hamas, originally supported by Israel as a counter-weight to the PLO, but now in danger of overtaking them, the PLO was considered the more moderate of the two groups.

Yasser Arafat revelled in the glare of the world’s media and the attention of the United States’ President as he shook the hand of Israeli premier Yitzhak Rabin at the White House.

Together with the Nobel Peace Prize that followed for both men in 1994, it was to be his finest hour. Yet it achieved nothing.

The Intifada had emerged from grassroots Palestinians and had taken the PLO by surprise. The people were capable of acting independently, but they still recognised the need for a leader with worldwide leverage.

When Arafat returned to Gaza as part of the Oslo Accords, he was greeted like a triumphant hero, which in a way he was.

Sadly, despite real attempts at diplomacy throughout the 1990s, by the decade’s end, with the failure of the most recent US efforts to establish peace in the Middle East, Arafat gave the green light for the Second Intifada, five years to the day after the signing of the Oslo II agreement.

The time for negotiation was over. Israel had failed to meet the schedule it had signed to turn over the West Bank to Palestinian rule. With the former much the stronger, there was no political will to give the Palestinians anything. Arafat, in his time-honoured tradition, turned the problem over to the guerrillas to see if they could have more success.

By 2001, with Arafat’s old nemesis Ariel Sharon in charge of the Israelis, Arafat was confined to his compound in Ramallah and held under siege. He would never be allowed to leave, except to die.

In 2004, struck down by a mysterious illness, Arafat was flown to France, and awarded a statesman’s welcome on arrival, before being treated in a Paris hospital.

Arafat’s condition deteriorated, and on Thursday, the 11th of November, he died. The cause of death could not be established.

It was a sad end to the life of a man who had achieved little for his people, either on the battlefield or through diplomacy, apart from a few notable successes.

When his body was returned to Ramallah for internment, it was mobbed by hundreds of thousands of hysterical mourners. Yasser Arafat was held up, by many, as the greatest ever symbol of the Palestinian cause.

From the Book Israel and Palestine: The Complete History