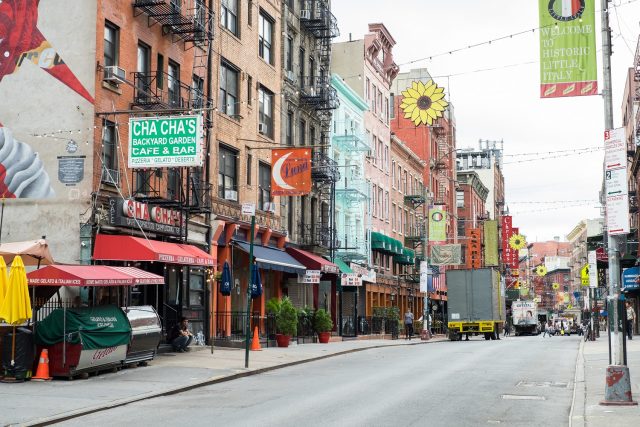 The stereotype of Little Italy is based on what these neighborhoods were during the diaspora. The idealized images of this time are of happy immigrants, children playing stickball, and laundry hanging on lines stretched between buildings. You could hear mothers calling their kids to dinner – “Tony, su tavolo!!” (Tony, it’s on the table!!) Along the street, various mom & pop corner stores would be festooned with aged meats and cheeses as the pushcarts would roll along with fresh produce. “Come getta you tomatoes! Apples! … Aye lady no squeeza da’ tomatoes! Ah fa napala!”

The reality of these times was much harsher.

The Little Italy of this era was composed of tenement buildings; five or six-story structures that housed as many as 30 families. The buildings stood wall to wall with little or no space between. The crowded conditions were made worse by a lack of light and poor air circulation. Sometimes people would refer to these as railway flats, or railway apartments, because the layout was similar to a railway passenger car. The rooms were in a row with one hallway down the side providing access.

The typical tenement apartment consisted of three basic rooms: kitchen, main room, and bedroom. The main room served as a workroom, women would bring in piece work from the local textile factories. In the winter, this work would be done in the kitchen close to the stove, the source of heat. There was no central heating or even radiators; the apartments were typically warmed by a coal or kerosene stove. Although the tenements had no central heating, they did have central plumbing; by that I mean there was typically a common toilet at the end of the hallway or in a courtyard which was shared by multiple families.

The main room of these apartments served as the bedroom for the children at night. These rooms were not large, but they would squeeze in a couple of beds which would be shared by the kids. Being Catholic, it was typical for Italian families to have as many as eight to ten children. The parents’ room was the furthest from the kitchen. With so many children in such a small space, no one had or even expected to have any privacy. Frequently, these children – due in part to the conditions in which they lived – died before reaching adulthood.

Now, these may seem to have been terrible conditions, and they were, but they were not so much worse than what the Southern-Italian immigrant had left behind. The homes of the contadini in Italy were reflective of the harshness of the lives they lived. They were tiny one-room structures, typically a mere 270 square feet or so. These dirt floor domiciles with unplastered walls were often shared with the livestock. Just as they did in the tenements of New York, a bed was shared among siblings. In Italy, however, these beds were simple heaps of straw.

If you were to travel to Alberobello in Puglia you can get a sense of what the homes were like for some of the contadini. There you can visit a trullo which is a small cone-shaped house, more accurately the main floor was circular with a cone-shaped roof. Being cone-shaped they could not be large. On average, the lower level had a diameter of approximately 15 to 20 feet with a height of around five or six feet. This was topped with a cone made out of limestone. At times there would be an alcove off the main room for a bedroom. A rough wooden floor would be laid at the base of the cone creating a loft often used for storage or a bedroom for the children.

Although some in Alberobello still live in trulli, it was primarily housing from the 14th to the late 19th century. One story (although the validity is suspect) is that the design of these unique structures enabled the homes to be taken apart easily to avoid taxes. When tax time came, you took your house apart and spread the stones around the field. Once taxes were over, you put it back together. If the contadini were poor, it was certainly not due to a lack of ingenuity!

Today, Alberobello is a tourist spot with most of the trulli stuffed with tourist items such as local olive oil, liquors, and small model trulli. While visiting, you may get a sense of the size of the home, but you will not get a sense of the poverty. Today, the buildings are well maintained with whitewashed walls and the paved streets are clean. The city is clean and thriving, far from the conditions of the previous century.

Italianita is the oustanding book from William Giovinazzo that explores the culture and history of Italians and Italian-Americans; from the time when the Greeks first colonized Italy, to the influx of Italian immigrants in the 19th and 20th centuries, to John Travolta strutting his stuff in a New York disco.