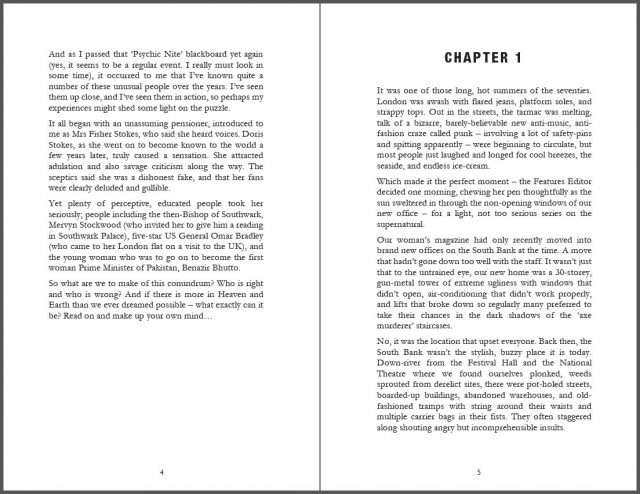 This is an excerpt from Voices Everywhere: The Mysterious Doris Stokes Effect by Linda Dearsley.

Doris turned out to live on the other side of town, behind Fulham Broadway Station in a big complex built just after World War I for disabled ex-servicemen.

Originally intended for veterans returning from the front after World War 1, the Fisher Stokes (Doris and husband John) qualified for a flat here, I discovered later, because John was an ex-paratrooper who’d been badly wounded at Arnhem in World War II. Months after being informed her husband was ‘missing, presumed dead’ following the battle, Doris eventually discovered John had, in fact, been injured and was a prisoner of war. When hostilities ended, John finally returned home with a metal plate in his head and mild brain damage. He was never quite the same man again, but the couple remained completely devoted to each other.

Today the flats – backing onto Chelsea Football ground – are smart and desirable; modernised out of all recognition. But, back then, behind the imposing exterior, Sir Oswald Stoll Mansions offered pretty basic accommodation. The flats were arranged in dour, red-brick buildings with austere walkways and concrete staircases, overlooking a communal yard. Doris and John’s second floor home had an indoor W.C. but no bathroom. If they fancied a soak, they used the tin bath that hung on the back of the kitchen door. And the front door opened into a tiny hall complete with big cupboard in which to store the coal.

Not that this fazed Doris. Though she jokingly referred to the place as ‘Sing Sing’ after the notorious New York jail, she and John seemed very happy with their London life. She’d even decorated the walkway outside their front door with pots of geraniums. A couple of folded deck-chairs were propped up against the wall. Presumably, whenever some warm sunshine penetrated the narrow aperture between the walkway wall and the floor above, the Fisher Stokes liked to sit outside their front door, catching the rays (for all the world as if they were on the beach in Blackpool).

The two of them were walking across the yard, criss-crossed with washing lines and flapping laundry when I arrived. John was carrying a bag of groceries, and Doris was searching through her purse for her key.

In later life, Doris became quite frail, but back then she was a tall, strong-looking woman – taller than her husband – with a halo of thick, springy grey hair that she was forever trying to subdue.

She had a warm smile and strikingly blue eyes. I don’t know what I expected – knowing nothing about real life psychics – but from the films I’d seen, a flowing kaftan, hoop ear-rings and a distracted, other-worldly air seemed essential. Doris, on the other hand, looked bafflingly normal as she strode up the stairs. When we got indoors, the first thing she did was light up a decidedly non-spooky cigarette.

So there we were in the snug sitting room, with its leatherette armchairs grouped around the old fashioned TV on which Doris loved to watch Coronation Street; there was an electric fire in the hearth and ginger cat dozing on the window sill. ‘That’s Matey,’ said Doris.

John brought cups of tea and then tactfully withdrew. Doris lit up another cigarette as the phone rang, which it repeatedly did, with a client wanting to book an appointment.

‘I charge £5 a sitting,’ she explained when she finished the call, ‘which may sound a lot (equivalent to around £20 today) but I only do two sittings a day, one in the morning and one in the afternoon. Some people think it’s easy, just sitting on your bottom all day, but even if it doesn’t look like it, it’s hard work.’

Even then she was puzzled and a little hurt that some people felt it was wrong to make a charge. ‘I mean even vicars get paid, don’t they?’ she said. ‘Everyone’s got to live.’

Yet, she clearly enjoyed her work. ‘When you see someone walk in here, miserable and grieving,’ said Doris sipping her tea, ‘and then walk out an hour later smiling, it makes you feel so good.’

She was a great talker, that’s for sure. I scribbled away, filling page after page of my notebook, wishing I’d paid more attention to my shorthand classes. It was all I could do to keep up. I scarcely got a question in edgeways.

‘I had a wonderful case the other day,’ Doris went on. ‘A Swedish woman came to see me absolutely distraught because her little son had drowned. As we were talking, I looked around and saw a small boy with blond hair and blue eyes standing in the room. He went up to the woman, laid his hand on her arm and smiling up into her face said: ‘Love you Alskling, love you.’

When I told her, she burst into tears. ‘That’s my son,’ she said, ‘I could never be cross with him because whenever he was naughty, and I tried to tell him off, he used to come over, look at me with those big blue eyes and say ‘Love you darling, love you.’ Alskling is Swedish for darling.’ When she left, she was a different woman. In fact, her husband was so delighted, he phoned later and asked for a sitting for himself.’

It seemed Doris could use her abilities in a variety of different ways. ‘One woman asked me to visit her at home,’ Doris explained, ‘and amongst other things she wanted me to find out where her late husband’s solid gold cigarette case had gone because it was very valuable. I’d never been in the place before, but I found myself walking straight to the wardrobe. Right at the back, I came across a dress suit. I took it out and there – in the pocket – was the lighter.’

Doris Stokes born in Grantham, Lincolnshire in 1920. To learn more about the fascinating lady’s life, through the eyes and ears of her ghostwriter – Linda Dearsley – please click on the book cover for Voices Everywhere: The Mysterious Doris Stokes Effect below.