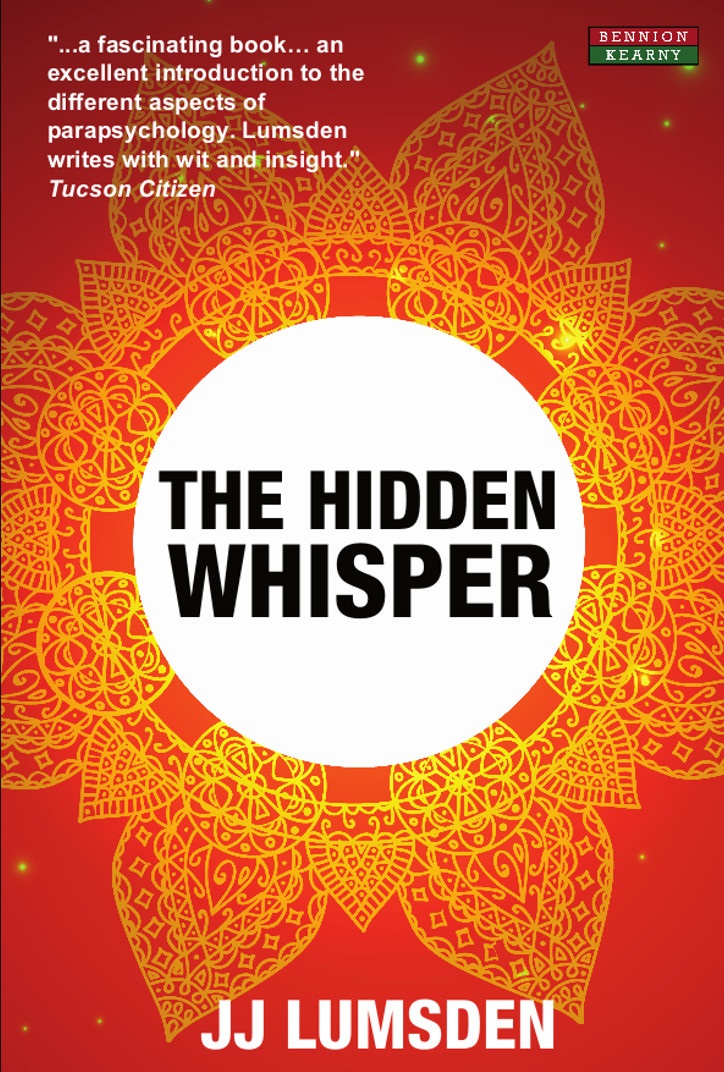 [parapsychology book series] A paranormal puzzle smoulders in the desert heat of southern Arizona. At the home of Jack and Chloe Monroe, a written message “Leave Now” appears then disappears, a candle in an empty room mysteriously lights itself, and – most enigmatically – an unidentifiable ethereal whisper begins to permeate the house. What was once simply strange now feels sinister. What once seemed a curiosity now seems terrifying.

Dr. Luke Jackson, a British Parapsychologist visiting family nearby, is asked to investigate and quickly finds himself drawn deeper into the series of unexplained events. Time is against him. He has just one week to understand and resolve the poltergeist case before he must depart Arizona.

The Hidden Whisper is the acclaimed paranormal thriller, written by real-life parapsychologist Dr. JJ Lumsden, which offers a rare opportunity to enter the intriguing world of parapsychology through the eyes of Luke Jackson. The fictional narrative is combined with extensive endnotes and references that cover Extra Sensory Perception, Psychokinesis, Haunts, Poltergeists, Out of Body Experiences, and more. If you thought parapsychology was like Ghostbusters – think again…

About This Parapsychology Book

A most unusual detective story.
Want to dive into the science and learn about Extra Sensory Perception, Psychokinesis, Ghosts, Poltergeists and more, but don’t know where to start? Or you don’t want to wade through dry academic textbooks? Welcome to The Hidden Whisper!

...a fascinating book… an excellent introduction to the different aspects of parapsychology. Lumsden writes with wit and insight. Tucson Citizen

…a fast paced read and one of those books you just don’t want to put down! For anyone interested in the paranormal and metaphysical, this is a super, fun book and one that I enjoyed immensely. http://www.moonslipper.com

This book works on many levels, an excellent introduction to the concepts current in the field of parapsychology… at best you may learn something new, and at worst you’ll have read a witty and well-written paranormal detective story http://www.parascience.org.uk/

The story is captivating and the quality of 70-some pages of endnotes and over 12 pages of references to studies are an invaluable resource to anyone who takes these subjects seriously… [the author shows] the required critical thinking of both sides of the parapsychological debate.  http://www.mind-energy.net…

…a unique fiction, non-fiction mix that is very well written…entertaining and amusing as well. If you like reading about parapsychology and the paranormal, then you should buy it http://www.ghostsamongus…

Beyond an interesting and captivating story, the author also successfully adds an extra dimension that provides his readers with an excellent education in the basics of real life parapsychology. Skeptics and believers in the paranormal alike will enjoy JJ Lumsden’s The Hidden Whisper.  http://publicparapsychology..

…a ghost investigation novel that has all the elements of a good detective mystery and spooky thriller…an engrossing haunting tale… an informative overview of the current theories on the phenomena. http://paranormal.about.com…

Dr. Lumsden may well have created a new art form… a story placed in an educational context that informs as well as entertains. We might dub it www.fiction.edu and hope that there will be others of its genre. Professor Stanley Krippner, AHP Perspective.

Here’s a novel novel. J. J. Lumsden has written a story about a parapsychologist investigating an apparent poltergeist, using the plotline as a vehicle to provide serious information, in the form of endnotes, on psi research. The result is entertaining and instructive in equal measure, and will appeal to SPR members as well as the general reader who would like to know more about parapsychology. Society for Psychical Research Book Review.

Why did you write a parapsychology book?

When people find out what you do, a good few questions normally follow. Some people think the paranormal is nonsense, others less so. It just seemed clear to me that folk might like an easy-to-read and accessible book that illuminates parapsychology and the paranormal.

Parapsychology is a field of study that seeks to investigate the existence of (and causal factors underpinning) psychic abilities, Near Death Experiences, post mortem survival (aka Life After Death), and elements of Out of Body Experiences. Phenomena such as poltergeists and ghosts are all also applicable.

Psychic abilities include forms of Extra Sensory Perception, and Psychokinesis (Mind over Matter effects). Scientific methods and techniques are employed to research the phenomena in question.

Various academic institutions and research organisations across the world carry out parapsychological research. For example, I studied at the Koestler Parapsychology Unit (University of Edinburgh). The unit was created in 1985, and its remit neatly encapsulates one side to parapsychology, namely – to conduct scientific research into “…the capacity attributed to some individuals to interact with their environment by means other than the recognised sensory and motor channels.”

Why did you choose this ‘novel / popular science’ format?

Just so the book isn’t too full-on. People can dip in and out of the endnotes when they want to learn more about particular topic areas, whilst (hopefully) enjoying the main part of the book as a standalone story.
How do you become a parapsychologist?

Parapsychologists hail from a number of disciplines including physics, philosophy and psychiatry (lots of ‘P’s it seems), but most have psychology backgrounds (mainly experimental, but also clinical). There are a couple of universities in the UK that teach parapsychology, both as courses at the undergraduate level, and as postgraduate qualifications.

I did my doctorate at Edinburgh University’s ‘Koestler Parapsychology Unit’, which is part of the psychology department. Since it was founded in 1985, the KPU has turned out over two dozen PhD graduates, and been home to scores of laboratory experiments.

Any lecture tours planned? What about in the USA?

I think we’ll have to see how well the book does first.

I really loved The Hidden Whisper. Fantastic! The book would make a great movie – any chance we’ll see Luke Jackson starring on the Big Screen?

Thank you for your kind words. The Big Screen? Maybe one day…

In the book, you discuss Zener Cards. Do you have any pictures of what they actually look like?

I’ve placed some sample Zener Cards on my blog here. A pack of Zener cards would contain five of each card type; twenty-five in total.

I’ve seen Ghostbusters. Do you live in a Firehouse and drive a Cadillac ambulance as well?

Summarize your book in 10 words or less.

Is it true that cockroaches have been used in parapsychology experiments?

Indeed. Helmut Schmidt (in 1970) set up an experiment to test whether cockroaches were able to use psychokinesis to prevent themselves from being electrically shocked. He found significant but unexpected results – the cockroaches were being shocked more often than they should by chance. This outcome prompted Schmidt to have a good think about the nature of psi, and ultimately led him to hypothesise that the experimenter may have a substantial effect upon the study outcome – using his or her psi to influence matters without consciously realising it (i.e. the test animals were not responsible). Other experiments with animals (which seemed particularly popular in the 1970s) have included: Baby Chicks: See Schmidt (1970b). Cats and ESP: See Osis & Foster (1953). Lizards: Watkins (1971). Gerbils: Parker (1974). Rats: Craig & Treurniet (1974)