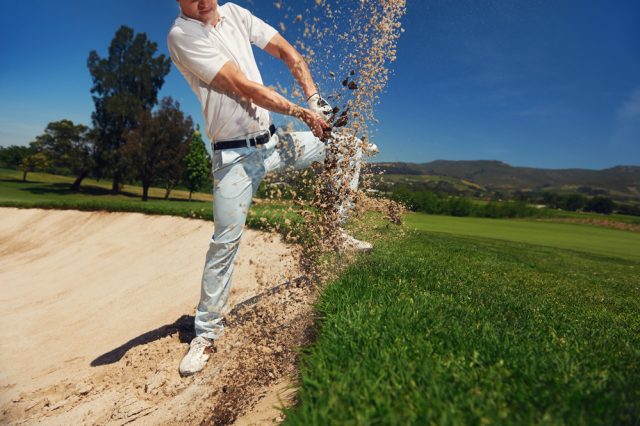 The pre-shot routine is a physical and mental sequence of actions to help golfers remain focused on the task at hand to play shots consistently well. Though the best golfers in the world might differ in the style of their swing, you will notice a similar sequence of actions for every shot. For instance, they will have a certain number of practice swings before setting up to the ball followed by a specific number of glances toward the target.

As well as a pre-shot routine, most golfers will also have a post-shot or post-mistake routine to allow them to recognise what went wrong with their swing or putt, and engage in a preferred action sequence. For example, after a poor swing, you will notice some golfers repeat their preferred swing. In match play, some golfers retake the missed putt before heading to the next tee.

We publish a number of books to help golfers improve.

Why are routines important? Routines are important for at least three reasons. First, they allow the golfer to remain consistent in the fundamentals of the set-up. The golfer can ensure that her grip, alignment, stance and posture are consistent each time she prepares for a shot. The best golfers in the world are always working on these fundamentals. Second, rather than thinking about irrelevant aspects of the game, such as the score or your opponent’s shot to the green, you can pay attention to what you need to do to play your shot well. Finally, routines that are well practised help us to move from conscious attention to unconscious attention – to execute the shot at hand. In other words, once we have engaged in a physical and mental sequence that is well learned, we can allow the shot to unfold without consciously attending to the mechanics of the swing. We let the swing do its thing.

A useful way to develop a pre-shot routine is to consider the acronym PAR. This acronym can represent: Preparation, Action, and Revision.

In the Preparation section, you can assess the shot at hand. For example, you might examine the lie of your ball, the wind speed and direction, the pin placement and any particular hazards you need to avoid. Then you plan the shot that is best for you, considering your skills and ability at this time. The advice we offer here is be conservative but confident. In other words, choose conservatively but play confidently.

Once you have decided on the shot you intend to play, and the club you intend to use, you can swing the club or putter to feel the shot you wish to make while imagining the flight or path of the ball. Create a clear picture of what you want to happen. Now, you can step into the ball and ensure your grip, alignment, stance and posture is right for your shot.

In the Action stage, you will have set-up correctly to the ball and you are about to begin your swing sequence. Some golfers engage in an action to begin their swing such as a forward press of the club while other golfers sit back into their posture. Others just begin to take away their club when they feel ready. One useful sequence of actions we have found beneficial for allowing the swing to begin, without conscious control, has been the following: Target – Ball – Smooth Away. The golfer looks at the Target for the final time, then draws his eyes back to the Ball and Smoothly draws his club away from the ball. This sequence is beneficial for two reasons. First, the golfer can pay attention to the two things that matter most at this stage: his target and letting his swing do its thing. Second, it reduces the ‘thinking time’ for golfers who might begin to worry about unnecessary things to play their best golf.

The final stage, Revision, is a vital element of the pre-shot/post-shot routine because it allows the golfer to accept the outcome of the shot and move on to the next one. Most golfers will think and feel a particular way after they have hit their shots because they will have spent a lifetime watching the outcome of each shot they have ever hit. Good shots give us good feelings and we begin to think good things about ourselves. When other golfers see our good shots they usually say “well done, great shot,” which acknowledges your competence in golf. After a poor shot, however, they might remain silent or say something like: “don’t’ worry about that one, you can get up and down from there.” If we allow them, poor shots will prompt us to think and feel negatively about our golf game and ourselves. Golfers with a sound self-image know that one or a few poor shots are normal in golf and they can recover from them. They know that poor shots do not make them ‘bad golfers’ or ‘bad people’. They keep the entire game in perspective.

It is a sensible idea to learn to accept the outcome of each shot as an objective measure of where the ball travelled. What we mean here is not to attach any valuations about you to the outcome of the shot. This is a challenging but worthwhile thinking skill to learn. If the ball consistently travels further left than you would wish, you can ask your teaching professional to examine your swing when you leave the golf course.

By Paul McCarthy and Marc Jones, authors of The Successful Golfer. 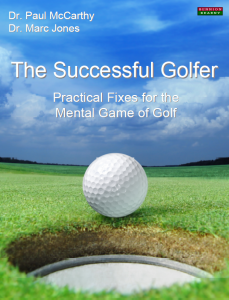