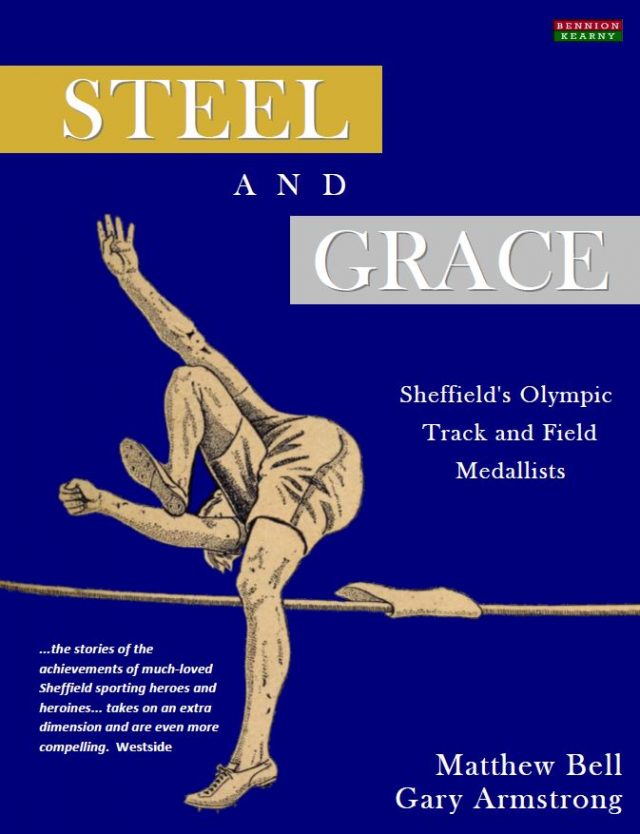 There is a British city that has produced some of the most exceptional individuals to ever grace the Olympic Games. A city that has developed many of the finest athletes to wear our national colours. Offering a unique insight, and drawing on extensive archives, Steel and Grace: Sheffield’s Olympic Track and Field Medallists examines the athletes of ‘Steel City’ and their contributions to the Olympic Games over more than a century.

The book examines the lives and careers of athletes who stood on the medal podium and positions their achievements within the political events that impacted upon the Games: in Berlin as Hitler showcased his Nazi regime; in Munich when terrorists murdered 11 Israeli athletes; in Moscow when British athletes competed against the wishes of the UK Government at the height of the Cold War.

Steel and Grace details the accomplishments and biographies of both well-known and sadly forgotten Sheffield athletes. These include the first man in history to run the 1,500 metres in under four minutes and the athlete who completed the last eight miles of an Olympic marathon with blistered and bloodied feet to win a silver medal. The same man survived the Olympic race that nearly killed several of its competitors.

In everyday life these men – and women – were miners, grocers, saw-makers, teachers. They were ordinary citizens who devoted their lives to the pursuit of Olympic glory. When amateurism made the transition to outright professionalism, at the vanguard of this change was a Sheffield athlete who was a double Olympic champion. The ultimate beneficiary was Sheffield’s ‘Golden Girl’ who stole the show at London 2012.

Steel and Grace is an exceptional contribution to Olympic literature; its exploration into the track and field history of Sheffield has no parallel. Bringing to life tales of gracious sportsmanship, fierce rivalry, heartbreak and joy, it highlights the value of Sheffield’s contributions and questions where the origins of the dedication required to achieve Olympic success might lie.

Matthew Bell is a mechanical engineer by trade but spends his every spare moment writing, with a keen interest in sport and local history. He has edited the Sheffield United FC fanzine Flashing Blade since 1989 and has written a weekly column in the Green ‘Un and Sheffield Star newspapers since 1993. His latest works, Shocking Sheffield: Forgotten Tales of Murder, Mishap and Gruesome Misdemeanour, Parts 1 and 2, and Long Shadows Over Sheffield, written in collaboration with historian Chris Hobbs, were published in April 2012, November 2012 and April 2014 respectively. In 2010, along with Dr Gary Armstrong, he co-authored Fit and Proper? Conflicts and Conscience in an English Football Club, the definitive account of the recent history of Sheffield United FC, and in 2011 Red, White and Khaki: The Story of the Only Wartime FA Cup Final was published, which studied the impact on the country – and on Sheffield in particular – of the continuation of professional football during the first year of the Great War. In 2012 he wrote Viva Sabella! From Buenos Aries to Bramall Lane and Back, a biography of the former Sheffield United player and Argentina national team manager. He was co-editor of Blades Tales in 2000 and Blades Tales 2 in 2004. He has written articles for FourFourTwo magazine, the 2003 Sheffield United v Arsenal FA Cup semi-final programme and Yorkshire County Cricket Club.

Dr Gary Armstrong is a Reader in the College of Business, Arts and Social Sciences at Brunel University. He previously lectured in Criminology at the University of Westminster and the University of Reading. Amongst the many criminology projects he has been involved in, two of the best known publications are Images of Control: The Rise of the Maximum Surveillance Society (co-authored with Clive Norris) and Surveillance, CCTV and Social Control (co-edited with Clive Norris and Jade Moran). His research into sports-related matters has produced the following publications: Football Hooligans: Knowing the Score; Blade Runners: Lives in Football and Sheffield United FC: The Biography. He has also co-edited, alongside Richard Giulianotti, Entering the Field: New Perspectives in World Football; Football Cultures and Identities; Fear and Loathing in World Football and Football in Africa: Conflict, Conciliation and Community. From 1998 to present he has researched the possibilities that football can offer to various demographics in the reconstruction of post-conflict Liberia. Recent research in Bosnia-Herzegovina has addressed the same question. Other long-term research has examined the role football has played in the politics of Malta, the study of which produced a 2009 book co-authored with Jon Mitchell titled Local and Global Football. The year 2010 saw the publication of a book co-authored with Brunel University colleague Alberto Testa titled Football, Fascism and Fandom: The UltraS of Italian Football. Another book, published in February 2011 and co-authored with Pete Fussey and Dick Hobbs, titled Securing and Sustaining the 2012 Olympic City, examines the policing and security implications that surrounded London’s hosting of the 2012 Olympic Games.